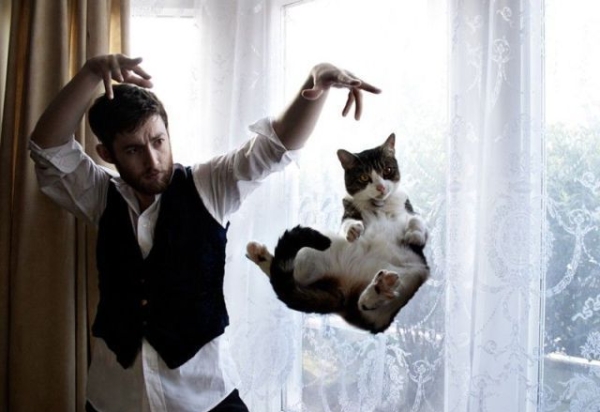 Good whatever time of day it is where you are, ladies and gentlemen. Today, I’ll introduce you a tool that will undoubtedly be useful for everyone who uses trailing stop in his/her trade in the Forex market.

Little help for beginners. What is a trailing stop?

Trailing stop is an algorithm for managing a level of a Stop Loss order. After setting a trailing stop (for example, with X points), the following occurs:

How to activate trailing stop? Open a position and click with a right mouse button on the order in the Trade tab in the Terminal window, and choose Trailing stop -> X points in the drop-down menu.

Thus, the trailing stop is our insurance in case when the price will turn around and go against us.

The trailing stop always watches over the price and moves the stop loss towards the price moving in our direction.

The trailing stop will close our order in profit (provided that the specified level in points has been achieved when putting the trailing stop), if the price goes against our position.

A small illustration of the trailing stop work: 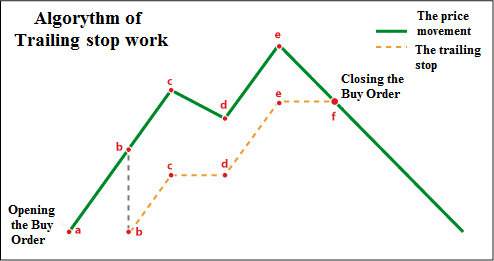 Point a:  We are opening the Buy order.

Point b: A trailing stop is being activated and moving the stop loss of our position after the price.

Point c: The price is starting to decrease and going against our Buy position; the stop loss is remaining unchanged.

Point d: The price is going up again, and the trailing stop order is moving after it.

Point e: The price has reached maximum and started down; the stop loss is remaining unchanged.

Point f: The stop loss has triggered, not allowing us to lose profits obtained previously.

Thus, the trailing stop all time moves the stop loss level after the price helping us to keep our profit.

So, we’ve dealt with a simple trailing stop. And what advantages have Forex TrailinRobot compared with the standard trailing stop?

Forex TrailinRobot is installed like any other advisor. Here is instruction if some problems happen.

After you have copied the advisor into the folder with MT4, attach it to the currency chart on which you want to use a trailing stop (it’s not important on what timeframe you work; you can open an additional chart with the advisor to make it work on many pairs simultaneously) and set the required parameters in its settings. After that, Forex TrailinRobot will start working.

Forex Trailingator doesn’t open positions itself! It only controls the orders opened manually or by other robots.

ProfitTrailing: If you enable this option, the adviser will activate a trailing stop just after the position goes into profit. If this option is enabled, the trailing stop is activated immediately at opening a position.

TrailingStop is a trailing stop level.

TrailingStep is a trailing stop step.

MagicNumber: If it is 1, then the advisor will trail all orders on a given currency pair. If it is 0, it will trail only positions opened manually. You can set the MagicNumber from other advisor and then Trailingator will only control the orders opened with the specified advisor’s MagicNumber.

Print
Expert Advisors, Trading Soft expert advisors, forex
﻿
Home | Форекс для начинающих | Обучение | Наше все | Роботест | Форум | For right holders
(c) 2016-2017 All materials can not be republished without active link to tlap.biz.
Attention! Before you start trading Forex, you should completely understand the risks involved with the currency market and trading on margin, and you should be aware of your level of experience.